Japan holds the art of tattooing close to its heart, inspiring countless tattoo designs and styles for centuries after its origin. Japanese tattooing has a rich history, boasting iconic imagery that’s transformed throughout the decades. Despite their long standing place in tattoo culture, they remain a popular choice among those looking for an artfully designed piece. Before choosing to get a traditional Japanese tattoo, people should consider the historical significance and meaning behind Japanese tattoos and choose a tattoo artist that can confidently create an accurate traditional Japanese tattoo.

What Are Traditional Japanese Tattoos?

History and Meaning of Japanese Tattoos

The historical origins of Japanese tattoos are heavily influenced by Japanese culture and morality. While some might get a Japanese-style tattoo for their artistry or intricate design, many people seek a traditional Japanese tattoo for its intended meaning or historical importance. Before World War II, tattoos in Japan demonstrated spiritual devotion or social status. These tattoos were also chosen as a symbol of protection or trinket of good fortune. By looking at someone with a traditional Japanese tattoo, you could assume their class, personal history, or valued morals.

Toward the beginning of their origin, Japanese tattoos were used to punish slaves and criminals for their transgressions or crimes. During the Japanese Edo period, those tattoo practices were banned, but the stigma of traditional Japanese style prevailed. Today, Japanese-style tattoos remain one of the most popular classic styles chosen and heavily inspired the traditional American tattoo style.

There are countless Japanese tattoo designs with unique meanings and styles, some sticking to the traditional Japanese artistry while others combine those guidelines with other contemporary styles. Many different images can translate to the Japanese style of tattooing, but some of the most popular designs chosen include (but are not limited to):

Dragons are one of the most common images within traditional Japanese tattoos, partially due to their significance and unique meaning. Many will choose creatures that signify strength for their Japanese-style tattoo, and dragons represent courage, wisdom, and good blessings within Japanese culture. Japanese traditional dragon tattoos usually feature dragons with snake bodies, occasionally having wings as well.

Flowers are a popular choice for Japanese-style tattoos and considering Japan has many gorgeous florae to choose from, there are luckily many flowers that cater well to the style. Flowers cater well to those who prefer a colorful tattoo and provide substantial creative freedom. A popular choice is a lotus blossom, known for rising from the depths to gorgeously bloom. Flowers often symbolize enlightenment and growth, making this a great choice for those who hold those concepts dear to them.

Fish and nautical themes are a popular tattoo design in many cultures, but the Japanese traditional koi fish is perhaps one of the most recognizable designs in tattooing. Koi fish are a common design requested because these fish pop up in numerous myths and legends, representing success, luck, and good fortune.

We briefly explored the popularity of floral designs within traditional Japanese tattoos but none compare to the worldwide reverence for cherry blossoms, known as sakura. These popular pink flowers are great on their own or within a larger design, commonly using bold red colors or sometimes watercolors for a more subtle pop of color. A cherry blossom’s lifespan is fairly short, so these flowers are often interpreted to represent the concept of transience, fleeting time, and momentary beauty.

Outside of dragons and koi fish, another highly distinguished design within Japanese traditional tattoo designs is the tiger. Tigers, ferocious and intimidating, often represent the concept of courage and protection. Japanese folklore usually pairs the tiger with a dragon, seen as the governors of wind and rain and rulers of the natural world. Some will choose to combine tigers and dragons within their design due to the belief that together they represent peace.

How to Choose the Best Japanese Tattoo Design for you?

Japanese style tattoos remain one of the most recognizable and iconic styles of tattoos, chosen by interested individuals all over the world. Some might wonder if choosing a traditional Japanese tattoo is disrespectful if you’re not Japanese, but many natives find the expansion of the popular designs flattering. The most important thing to guarantee before choosing a Japanese-style tattoo is that you understand the tattoo’s significance and meaning to avoid being disrespectful.

Once an idea of a design has been chosen, it’s time to think about where on the body you’d like it placed. After you know where you’d like the design to be, begin to consider how large the design should be, being mindful of not warping the image with its size or placement. Lastly, make sure to choose a tattoo artist that you can trust who understands the fundamentals of traditional Japanese tattooing that can design a tattoo that properly represents the traditional Japanese style.

WHERE CAN I HAVE MY TATTOO? 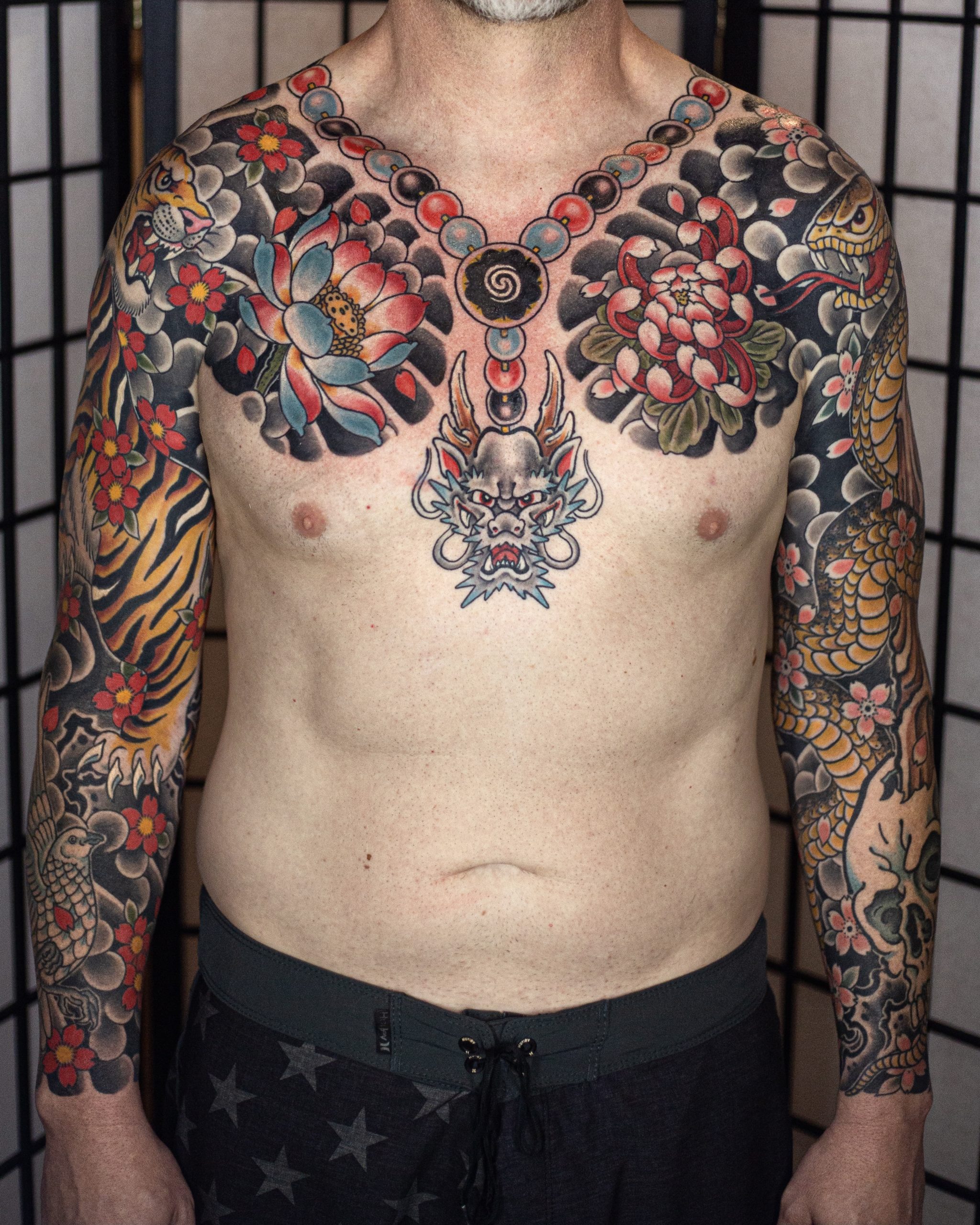 BOOK AN APPOINTMENT FOR A JAPANESE TATTOO AT CHAPTER ONE TATTOO

Whether you’re considering Japanese tattoo designs as your first tattoo or a part of a larger sleeve or piece, Chapter One is here to help. Chapter One Tattoo is proud of our consistent ability to create captivating designs from our trusted team of artists. Check out a few of our artists that specialize in the traditional Japanese style and book an appointment today!